The coast of Alicante is recognized as a continuous coastal system of great environmental quality, although it has lived a process of anthropic transformation that has changed its morphology and natural dynamics along with its ability of resilience to cope with the effects of climate change. On this kind of coast the diversity of forms is a characteristic feature. Alicante coastline morphology was formed in the Quaternary era. Now we can see there some traces of the structure of coastal blocks with high rocky pieces such as Cabo de las Huertas, Serra Grossa and Benacantill, where the beaches are formed from the erosion of the rocks and the sediments produced by the waves. This formation process produces a wide gradient of scenarios that provide environmental quality and tourist attraction to the coastal edge.

In this context, Alicante coastal corridor is configured as an authentic territorial and urban infrastructure. It is the morphological and functional support articulator of ecological, cultural and productive relations between land and sea; between urban and natural. During the last decades there have been proposals and interventions on the coastal edge of ​​Alicante, sometimes this sort of actuations have disturbed not only their identity, but their use and capacity for resilience. For this reason, the proposal reclaims landscape as infrastructure and the coastal corridor as a framework with the potential for linear and transversal articulation of the system. In this way, the project of the coastal corridor allows the integration of an interconnected system of spaces that allow different environments and situations for humans and non-humans, adjusted to the diverse nature and the different capacity of use of this exceptional coastal environment. 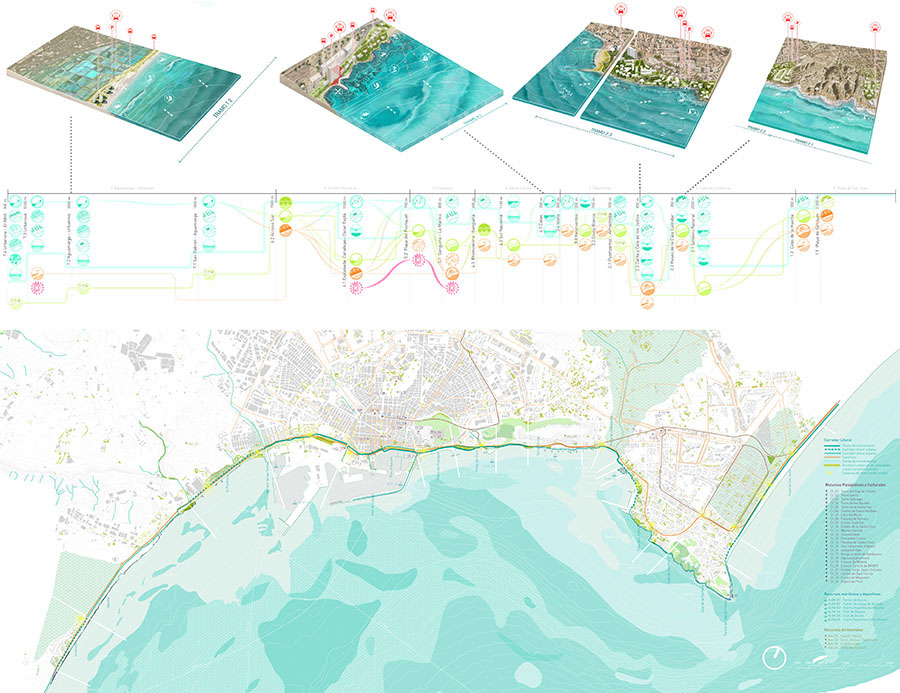